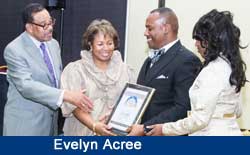 uses on positive news in Winston-Salem and surrounding area.

James Perry, the Winston-Salem Urban League CEO remarked, “Evelyn is visionary. Her eyes focus exclusively on success. This award is a testament to her leadership, the board’s commitment, and the staff’s hard work. We are humbled by the Chronicle’s recognition.”
Read full press release.